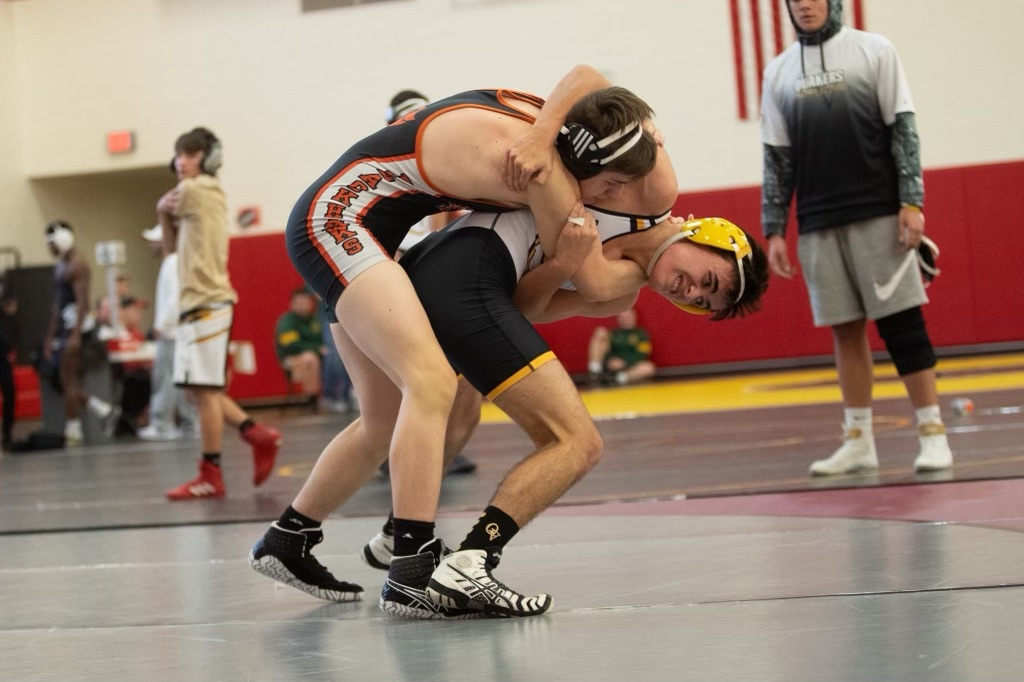 ‍
The Flaherty Fardo wrestling scholarship has awarded $1,000.00 annually to a graduating wrestler(s) from Quaker Valley who demonstrates unique ability to overcome adversity both on the wrestling mat and in life. While academics are considered, the scholarship is more centered on the character and leadership qualities of the award winning individuals, as demonstrated through answering questions and peer recommendations. For 2021, Flaherty Fardo is proud to announce the winners of The Quaker Valley Wrestling Scholarship as Gino Angeletti and Cole White.

Gino Angeletti is not only a 4.0 student, but he maintains a positive attitude even when he does not always have success. His career record at Quaker Valley after wrestling for 4 years was below .500 but that never allowed Gino to feel sorry for himself or stop working. Adversity reveals character and that is Gino Angeletti. Gino is the student who always shook his coaches hands at the end of every practice and thanked them. He is an exemplary student, courageous wrestler and excellent example for the youth of Quaker Valley. Gino believes wrestling has directly contributed to his success and plans on attending a 4 year college with an emphasis on engineering or business.

"I still remember the times I have wanted to quit, I still find myself going to practices because I wanted to keep pushing myself forward. So as I continue on in life, I don't want to give up. I have gained a lot more confidence in myself than in the past, which has made me feel a lot better about myself. Wrestling is something that I will hold the highest respect for, and has changed me for the better." - Gino Angeletti

Likewise, Gino has also earned the respect from his coaches:

“Gino Angeletti is one individual I have worked with who uniquely stands out amongst the rest. When he would make a mistake or lose a match, he would immediately start thinking about the steps he needs to take to get better. He would always be the first one to practice and the last one to leave, and no matter how tired or beat down he was, he always made sure to shake every single coaches hand and say "Thank you." Gino's attitude and work ethic was contagious, which caused other kids in the room to strive to be like him. Gino is an inspiration to his peers, myself, and the rest of the coaching staff.” - Logan Heinl, QV Wrestling Coach

Cole moved to the district as a sophomore after his parents relocated due to a change in employment. Although Cole had wrestled youth in California, he had not wrestled for a number of years before moving to Quaker Valley. After moving from California, Cole found himself in a brand-new and challenging environment. Despite being in a new place, Cole quickly bought in to the goals of the program and ultimately became one of the most respected individuals on the team because of his dedication to himself, his dedication to his teammates and his commitment to Quaker Valley Wrestling. Cole spent countless hours in season and out of season in order to improve so that he could perform at his best and also to ensure that his teammates could count on him in tough situations. Cole’s improvement over the last three years speaks to his character as an individual. He took a difficult situation and turned it into a positive experience that his coaches believe will serve him well in all facets of life going forward.

The sport of wrestling comes with many difficulties no matter the individual. Cole certainly had his share of adversity, yet he battled through each instance with resilience. In his senior year, Cole was really starting to reach his stride and accomplish great things individually on the mat during a season that had various restrictions and oddities due to the COVID-19 pandemic.Cole’s win over the wrestler from Avonworth in route to capturing an individual subsection championship at Montour was one of the highlights of his wrestling career.

Cole has earned the respect of his coaches, family, peers and friends.

“If I had to answer one question, What is the most valuable thing Cole will take away from his time at Quaker Valley”, it would be that no matter what happens, good or bad, the outcome will not impact his focus on achieving his goals. Even when life knocks you down, which it inevitably will, what ultimately matters is how you respond and react to the adversity you face defines the individual above all." - Garrett Frye, QV Wrestling Coach

For a Decade straight, Flaherty Fardo Rogel & Amick, LLC Partner Nicole Amick has been recognized for her excellence in property tax appeals and Pennsylvania real estate law. First recognized in 2013 as a Super Lawyer Rising Star, this is the 10th consecutive year Attorney Amick has received this distinguished honor. Each year, no more than 2.5 percent of all lawyers are selected by the research team at Super Lawyers to receive this honor and recognition requires both legal excellence and respect among the legal community. When it comes to Allegheny County property assessments and tax appeals, Nicole is widely regarded as one of the best.


info@pghfirm.com

412.802.6666
Thank you! Your submission has been received!
Oops! Something went wrong while submitting the form.